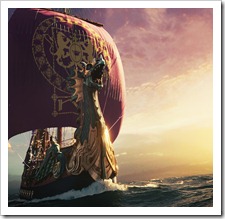 Many of you are probably aware that a movie version of Voyage of the Dawn Treader from The Chronicles of Narnia has been released. I have not been able to see the movie yet but the release prompted me to reread the book, something I hadn’t done since I was a boy. Being as young as I was, I mistook the book for a simple adventure story when it is so much more than that. I have come to find that it is my favorite of the Narnia books and is filled with insights into Christian living.

As for the story, the main character of The Voyage of the Dawn Treader is a young boy who wasn’t in the previous books and he is introduced like this:

There was a boy called Eustace Clarence Scrubb, and he almost deserved it.

That should give you an idea of the type of boy he was if he deserved a name like that. Lots of things happen throughout the story and he, of course, gets pulled into Narnia along with Edmund and Lucy where they sail on the Dawn Treader with Prince Caspian. At one point in the story, while visiting an island, a miserable, self-pitying Eustace wanders off from the rest of the group and comes to a cave where this happens:

At the bottom of the cliff a little on his left hand was a low, dark hole – the entrance to a cave perhaps. And out of this two thin wisps of smoke were coming. And the loose stones just beneath the dark hollow were moving just as if something were crawling in the dark behind them.

Something was crawling. Worse still, something was coming out. Edmund or Lucy or you would have recognized it at once, but Eustace had read none the right books. The thing that came out of the cave was something he had never even imagined – a long, lead-colored snout, dull red eyes, no feathers or fur, a long lithe body that trailed the ground, legs whose elbows went up higher than its back like a spider’s, cruel claws, bat’s wings that made a rasping noise on the stones, yards of tail. And the lines of smoke were coming from its two nostrils. He never said the word DRAGON to himself. Nor would it have made things any better if he had.

Later it goes on to say this:

Most of us would know what we should expect to find in a dragon’s lair, but, as I said before, Eustace had read only the wrong books. They had a lot to say about exports and imports and governments and drains, but they were weak on dragons.

This started me thinking and questioning… what I am reading, studying, spending my time with? I tend to spend a lot of time reading – learning all kinds of things for work and doing some reading for fun also. While I do spend time in study of the scriptures and related books, I need to make sure not to lose sight of what is truly, eternally important. The things that we read, listen to and watch are important and there are dragons out there that we face.

I ask you to ask yourself – What are you reading, learning, watching? Are you weak on dragons?

Posted by Kenn Anderson, Jr. on January 25, 2011 in Christianity